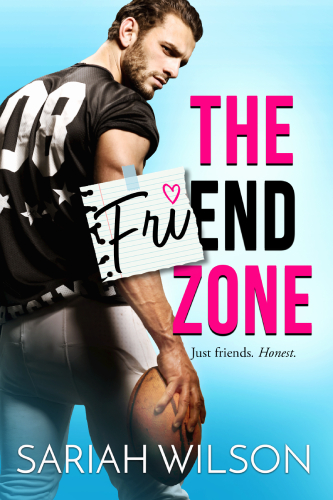 Disgraced college quarterback Logan Hunt was on his way to NFL stardom when he messed up big-time. Now the Texas star player with a bad temper has a new option: Seattle’s EOL College—as in End of the Line, to his fellow misfit recruits. It’s Logan’s last chance. If he can follow the rules. No parties, no fighting, no swearing, and oh, no dating the coach’s daughter, Jess. Simple. Yeah, right. For Logan, there has never been a rule he’s more tempted to break.

The deal is “just friends.” The pretty, confident, and fiercely smart math whiz is fine with pizza, tutoring, and keeping Logan in line. But the closer Jess gets, the more receptive she is to his warm heart and spirit—not to mention his irresistible off-field passes. With defenses down, they’re both heading into the danger zone.

It’s more than thrilling. It’s love. It’s also a game changer that could sideline Logan’s NFL goals—and more important, a future with Jess. But dreams are worth fighting for, right?

END_OF_DOCUMENT_TOKEN_TO_BE_REPLACED

Harper Chase has just become the most powerful woman in the NHL after the death of her father Clifford Chase, maverick owner of the Chicago Rebels. But the team is a hot mess—underfunded, overweight, and close to tapping out of the league. Hell-bent on turning the luckless franchise around, Harper won’t let anything stand in her way. Not her gender, not her sisters, and especially not a veteran player with an attitude problem and a smoldering gaze designed to melt her ice-compacted defenses.

Veteran center Remy “Jinx” DuPre is on the downside of a career that’s seen him win big sponsorships, fans’ hearts, and more than a few notches on his stick. Only one goal has eluded him: the Stanley Cup. Sure, he’s been labeled as the unluckiest guy in the league, but with his recent streak of good play, he knows this is his year. So why the hell is he being shunted off to a failing hockey franchise run by a ball-buster in heels? And is she seriously expecting him to lead her band of misfit losers to a coveted spot in the playoffs?

END_OF_DOCUMENT_TOKEN_TO_BE_REPLACED

When Maxine Nicholls discovers her fiancé is cheating, she turns to fast food and nighttime soap operas, but her sister has a plan—unbridled rebound sex with a stranger.

As one of Toronto’s hottest players, Antony Laurent tallies scores on and off the ice, but when the chiseled defense man hits a slump, rumors of a trade to the minor league send him to ambush a managers meeting at a posh club.

That night a chance encounter ends up as an unforgettable evening of passion. But Maxine and Antony are about to discover a game of casual hook ups can lead to something neither one of them thought they deserved—the right fit.

END_OF_DOCUMENT_TOKEN_TO_BE_REPLACED

Confession #1: I used to be a puck bunny, but after a hockey player broke my heart, I gave up all things hockey. Now I’m just focused on finding a way to pass my math class so I can graduate college.

Confession #2: Ryder “Ox” Maddox’s deep, sexy voice sends fuzzy tingles through my entire body, and I’m powerless to stop it. Which is a big problem since the hot, surprisingly funny hockey player is my new math tutor.

Confession #3: I can’t stop thinking about how ripped Ryder is from all his hockey training, and how fun it’d be to cross lines with him.

Confession #4: I kissed a hockey player and I liked it.

Confession #5: If I’m not careful, I might relapse and fall for Ryder, and then I’ll be totally pucked.

END_OF_DOCUMENT_TOKEN_TO_BE_REPLACED

When a sexy, forbidden spark blazes to life between professional hockey player Zac Elliott and the team owner’s daughter, he’s willing to risk being benched to have her. Their relationship is deeply passionate and intensely private…until the press catches them in the act. The only way out of the penalty box is for Zac to play hockey like life–and love–depends on it…

Physical therapist Annie Davidson is great at her job but unlucky when it comes to love. All she can do is focus on work…that is until she runs into professional hockey player Alec O’Meara. Alec likes to keep things loose on and off the ice, but the red-headed Annie challenges his beliefs and makes him think about taking their relationship to the net…