Book: Because I Can

John “Monty” Montgomery is a workaholic. The oldest of the Montgomery children, he’s been working by his father’s side building the family hotel chain almost his entire life. His commitment to the business leaves no time for romance. But that’s about to change.

Georgia Lennox has been fantasizing about Monty ever since she started her gig as handywoman at Montgomery Manor. She figures Monty is way out of her league, so she hasn’t dared to act on her feelings — until he offers to help fill a volunteer shortage on her latest project, building houses for families in need.

Sparks fly as they spend time together, first on the job site, then off. But Georgia’s not your typical frilly and feminine society girl. Hoping to find a way to fit in with the Montgomerys, she agrees to be made over by Monty’s sister for an event. But if she lets her rough edges be smoothed away, will she be letting go of the very thing that attracted Monty in the first place?

This story came at such a right time that it took me by surprise. And I do like surprises so it was pleasant. I was already looking forward to workaholic John ‘Monty’ Montgomery the Third and Montgomery Manor’s skilled handywoman Georgia Lennox, but this was so much better than I expected. First off, Monty was the epitome of a good hero, hell, a perfect hero. The kind of hero I’d want all my heroines to end up with, the kind of hero I’d love to read in many upcoming books, over and over again.

END_OF_DOCUMENT_TOKEN_TO_BE_REPLACED 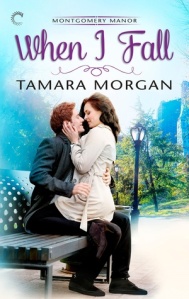 Book: When I Fall

Socialite Rebecca Clare gets through life one vodka tonic at a time. Emotionally shattered after her best friend’s death, she’s cast as the latest pseudo-celebrity screwup and hounded by paparazzi 24/7. So naturally, the cameras are rolling when she gets into a scrap at a club (he started it). But then an unexpected white knight steps in.

Playing caretaker isn’t Jake Montgomery’s usual role, but Becca is his stepmother’s little sister. As they bond over their bad reputations, they find they have a lot more in common than the spotlight. When a photo of the nightclub incident goes viral, it raises protective instincts that Jake never knew he had. What better way to save Becca—and the family—from scandal than by claiming he’s her fiancé?

Becca agrees to play along, never expecting a fake engagement to feel so right. But she’s vowed never to depend on a man for happiness; how can Jake convince her that falling in love is worth the risk?

Seems like the Montgomery Manor folk know the how to of easy banter. Having already met Jake and his flirtatious ways in the previous-and very much fun- book of the series, I knew what I was getting into. What I didn’t expect was the whirlwind that Rebecca was. I don’t know why, but when it comes to overly seductive men I always figure the one to bring them to their knees is going to be a prim and proper woman. Maybe it’s the opposites attract thing that lures me into this way of thinking, but this is what I expect. And Rebecca is no prim and proper woman, let me tell you. As seductive and overly friendly-not at all in a creepy way though- Jake was, Rebecca was all those things as well. From the first page on, we get the kind of crazy character she is, though maybe crazy is too strong a word here since we do discover an inner layer to her that’s hidden from everyone else. But with the careless way she handled things around her and her impulsiveness, I thought she wouldn’t complete Jake’s irresponsible character. I was wrong.
END_OF_DOCUMENT_TOKEN_TO_BE_REPLACED

Book: If I Stay

Ryan Lucas would rather be anywhere but Ransom Creek, Connecticut. After losing his high-adrenaline career as a Hollywood stunt driver, he’s had to tuck his tail between his legs and take up employment as a chauffeur for the Montgomerys, a wealthy hotelier family.

Amy Sanders has returned home to Ransom Creek to take over her mother’s former position as nanny to the Montgomerys—bringing her close to dashing Jake Montgomery once again. She grew up with a major crush on Jake, and it’s not easy to leave those feelings behind, even though her friendship with the hard-edged family chauffeur, Ryan, has a sizzling undercurrent of undeniable attraction.

Amy’s determined to prove to Ryan that life at Montgomery Manor isn’t all bad, but each time they draw closer Jake swoops in. Amy is torn between two men—and two worlds. And Ryan is rapidly coming to learn that if he wants to make Amy his, he’ll have to prove to her that life downstairs can be everything they both want.

Has anyone ever watched Upstairs Downstairs? It was before my time-yes, yes, there are shows that are older than me- but I tried to watch it whenever I could catch it on tv. It had a nostalgic aura and pastel tones that kept your interest and had you playing it on the background at least. It was a show that I know I would’ve been a big fan of at its own time had I been able to start from the very first episode. Alas, by the time I was old enough to be interested-not to brag about my young age here, mind you- the show was over and became a classic already.

For those of you wondering why I rambled on about this show, I’m sure you can guess what it’s about. The interesting household mix of the upstairs owners and the downstairs servants presented an intriguing story. And now, Tamara Morgan has taken that and adapted it to the modern life. Let me tell you, with all the honesty I can muster, that she’d done an exceptionally good job with it. If I ever wished for such a plot to be told in a contemporary romance, I’m sure this was what I would’ve wished in my mind-or heart. END_OF_DOCUMENT_TOKEN_TO_BE_REPLACED