And with this book, I say goodbye to yet another series by one of my favorite historical romance authors. Did I enjoy it? Yes. Was it life changing? Not exactly. But it certainly was enjoyable, or perhaps I’m biased because it’s Julia Quinn we’re talking about here, and let’s face it, I’m never letting go of anything by her.

The story starts off just around the same time as the previous one has ended, where our hero Dunford -whose first name is a well known mystery- receives news that a distant relative had passed away and he earned a lordship and a big estate. This big estate, however, is managed by one diligent Henrietta ‘Call Me Henry, Everybody Does! Barrett. She’s a hardworking woman, she likes to wear breeches and isn’t afraid to get her hands dirty, or her dresses!
So you see where this is going? A well known rake meets his match in a well working innocent.

END_OF_DOCUMENT_TOKEN_TO_BE_REPLACED 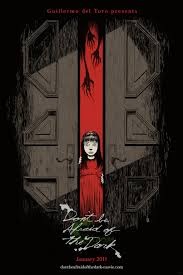 Dear whoever stumbles upon this blog,

I’ve been waiting and waiting to write my first post on this blog, but I’ve come to realize, as it is always told by published authors, that putting it off is useless and it’s making me more and more lazy by the minute. So I finally decided to just go with it and the honour of being my first post, hehe, belonged to the movie ‘Don’t Be Afraid of The Dark‘ by Guillermo Del Toro.

I’ve been stuck on a horror/thriller mode for a while now, been craving for such movies when I get a chance in front of the tv and I was pretty excited when I came across this movie. Not only was it an American horror which meant I could watch it without worrying about catching up with the subtitles, it was also a movie by Guillermo Del Toro, so I had a certain kind of expectation from it. Unfortunately for my horror/thriller craving mind though, I was disappointed.