Up-and-coming designer Kelsey McClane is on the cusp of success. Recently divorced, she should be enjoying her newfound freedom and glamorous future. Instead, she’s living in fear of the past. When she returns home to Portland on a press tour, danger creeps closer than ever. As threatening messages from her bitter ex-husband leave her vulnerable, a new man in her life makes her feel protected.

Former Army Ranger turned security professional Hunter O’Donnell is hired to guard Kelsey. When a shattering explosion rocks her world, Kelsey’s ex is the prime suspect, but Hunter speculates there’s more to the situation than Kelsey’s letting on. Intent on keeping her safe, he delves into Kelsey’s past. As the two work together to unmask her stalker’s identity, a fire ignites between them that they both struggle to contain.

While the investigation proceeds, it draws them closer not only to each other but also to a lethal plot that’s been in the works behind their backs. And with each new secret unveiled, it’s not just temptation putting them at risk—it’s a madman who will not stop until Kelsey is dead.

The third book in Elisabeth Naughton’s Deadly Secrets series was a great read, a mix of action and romance. The story quickly sucked me in after the first chapter, and before I knew it, I was more than halfway through!

I don’t know if you’re familiar with the series, but it follows adopted siblings who have to overcome obstacles both from their past and their present, all the while trying to maneuver their feelings for their partners. And this one was about Kelsey, the adopted daughter of the McClane clan, the new designer in town and the owner of certain personal and psychological problems, the biggest of which is her abusive ex husband. Enter Hunter O’Donnell, who’s a friend of family and currently her hired personal bodyguard. After a tragedy that shakes their conception of danger, the two are thrown in a cat and mouse game with a deranged killer.

So, to sum up, have a wake up call about how much danger you’re in, go hunting for clues as to what’s going on, try to stay alive, overcome personal baggage and fall in love. That’s the plan. Easy peasy, right? Think again, folks.

END_OF_DOCUMENT_TOKEN_TO_BE_REPLACED

Adair Thorne has just watched his gaming-hell dream disappear into a blaze of fire and ash, and he’s certain that his competitors, the Killorans, are behind it. His fury and passion burn even hotter when he meets Cleopatra Killoran, a tart-mouthed vixen who mocks him at every turn. If she were anyone else but the enemy, she’d ignite a desire in him that would be impossible to control.

No one can make Cleopatra do anything. That said, she’ll do whatever it takes to protect her siblings―even if that means being sponsored by their rivals for a season in order to land a noble husband. But she will not allow her head to be turned by the infuriating and darkly handsome Adair Thorne.

There’s only one thing that threatens the rules of the game: Cleopatra’s secret. It could unravel the families’ tenuous truce and shatter the unpredictably sinful romance mounting between the hellion…and a scoundrel who could pass for the devil himself.

A knife-fight in the Dials. Plucking a nob’s purse with a constable underfoot. Scaling a London rooftop.

Want me to go on, do you? Because I can go on and on with the list goes of things I’d rather do than live with the fancy nobs in Mayfair. Yet, that is precisely where I, Cleopatra Killoran find myself.

END_OF_DOCUMENT_TOKEN_TO_BE_REPLACED

Book: Hurts To Love You

Well-behaved women don’t lust after men who love to misbehave.

Heiress Evangeline Chandler knows how to keep a secret . . . like her life-long crush on the tattooed hottie who just happens to be her big brother’s friend. She’s a Chandler, after all, and Chandlers don’t hook up with the help. Then again, they also don’t disobey their fathers and quit their respectable jobs, so good-girl rules may no longer apply.

Gabriel Hunter hides the pain of his past behind a smile, but he can’t hide his sudden attraction to his friend’s sheltered little sister. Eve is far too sweet to accept anything less than forever and there’s no chance of a future between the son of a housekeeper and the town’s resident princess.

When a wedding party forces Eve and Gabe into tight quarters, keeping their hands off each other will be as hard as keeping their clothes on. The need that draws them together is stronger than the forces that should shove them apart . . . but their sparks may not survive the explosion when long-buried secrets are finally unearthed.

END_OF_DOCUMENT_TOKEN_TO_BE_REPLACED

Book: The Serpent (The Immortal Dealers #1)

One woman is in a world of otherworldly trouble—and she’s going to have to bet her life to save humankind.

Ernestine “Ernie” Terwilliger has put her dreams aside to look after her eccentric mother. Case in point: saving her from a mysterious stranger who’s just stormed the terrified woman’s antique store wearing a rattlesnake tattoo, leveling threats, and brandishing the weirdest deck of cards Ernie’s ever seen.

When Ernie grabs some of the cards and runs, she’s launched into a world she never knew existed—one her mother may know more about than she’s revealing. With a handful of stolen cards, Ernie has just been made an unwilling player in a game of good versus evil. But she’s not even playing with a full deck, and its original owner is more than happy to kill to get his cards back.

Suddenly Ernie’s matching wits and plays with the supernatural Immortal Dealers, who can raise empires, damn souls, and shape the world’s destiny. It’s up to Ernie to defeat the most brutal member of their order. And if her roguish new ally isn’t bluffing, he can help. The mystery is all in the cards, and to save her life—and humanity—Ernie had better learn how to deal. 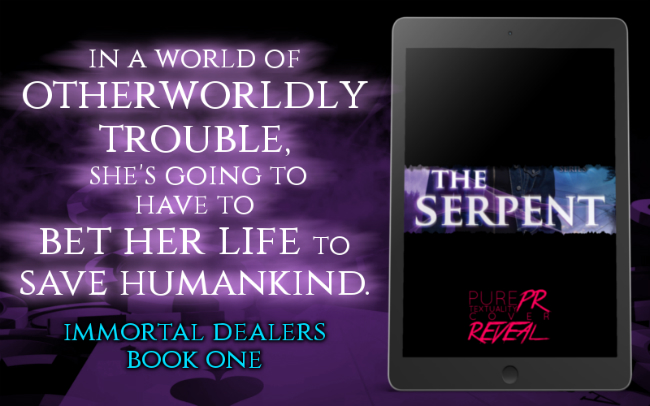